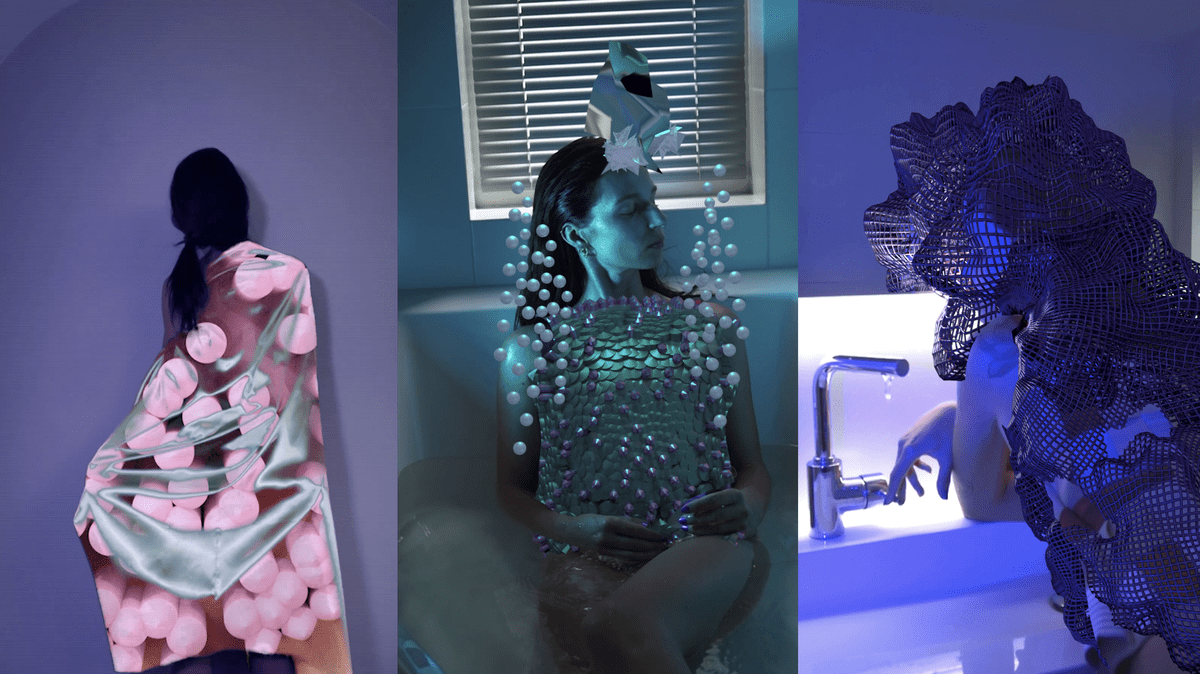 As Augmented Reality becomes embedded within everyday life, the digital world will create layers of intangible possibilities on top of reality. This will have an effect on the way we project identity.

In Hyperstition, I put myself in the role of an identity designer of the future, using AR as a new step in the discipline of fashion.

Traditional fashion design has always been based on limitations of tangible textiles, however, when AR becomes part of the process, what is physically possible becomes a secondary issue.

The new limits are set by how far digital design can go. Instead of wearing fabric and seams, we’ll bewearing code, our clothes will be rendered rather than sewed.With virtuality taking its position in fashion design, digital fantasies are able to have consequences in real life. This phenomena is known as hyperstition. 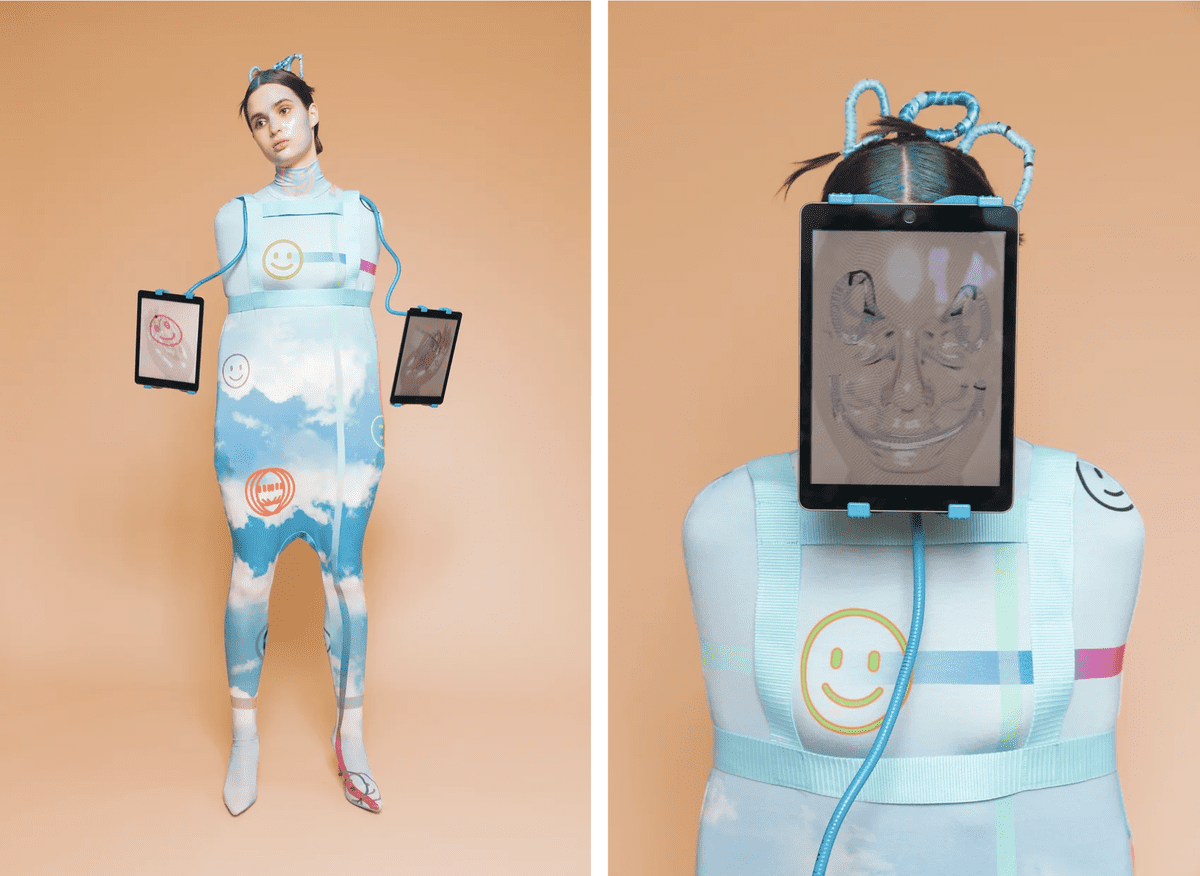 Kayfabe is a representation of the online persona, one presented as real to the viewer, when in fact it is a staged, calculated portrait of the user.

The online persona projects an image of happiness, wealth and unreal perfection, leaving the real identity of the human in the background. The real identity is deformed, placing the importance on the actions shown online.
​
This approach to online display is specially characteristic of Instagram, where users create micro reality shows from their own lives: planned, staged and filtered. The deformation of identity comes when the profile is perceived as a real by the viewers, blurring the lines and understanding between what is real and what is a well disguised fantasy. 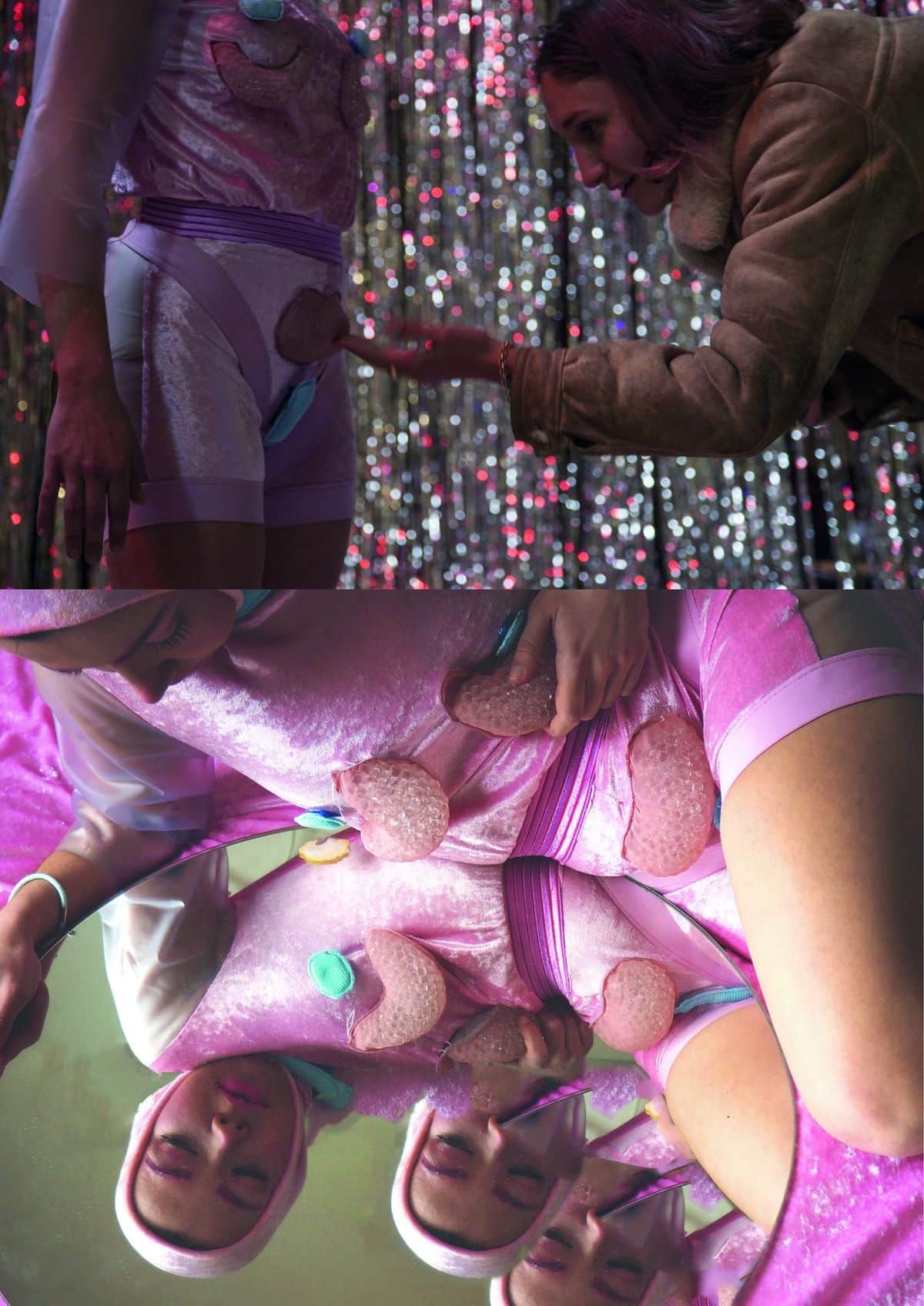 "Me and My Device" is an interactive performance exploring the possibility of a musically augmented body. By merging a fleshy and greasy human with a wet and conductive digital interface, man is suddenly able to produce new sounds with its body. This new sense is not a practical one but rather for pure enjoyment of expressing oneself.
​
This piece aims to start a conversation on the evolution of our intimacy with technology. The performer is transformed into a living device that the audience can touch and use to create sound. The garment worn by the performer is soaked with gel and water, a new experience of touch that triggers sound at every interaction.

Born in Madrid 1995
Design Academy Eindhoven Alumni
Clara Escalera is a Designer and Trend Forecaster interested in showing her speculations of the future by playing with the frontiers between reality and fiction, using new technologies to create a healthy and uplifting embracement of them in the audience.
With her projects, she shows viewers the complex sociological trends of our current context and those we will face, through scenarios that blur and challenge the boundaries of reality and fantasy. Her philosophy is based on the fact that, by knowing what is to come, it will be possible to make the most of it and generate feelings of hope, joy and emotion about the unknown.
Fashion and identity design are a lens from which to look at humanity at a given moment, and she uses them as tools to condense her research and predictions of the future.