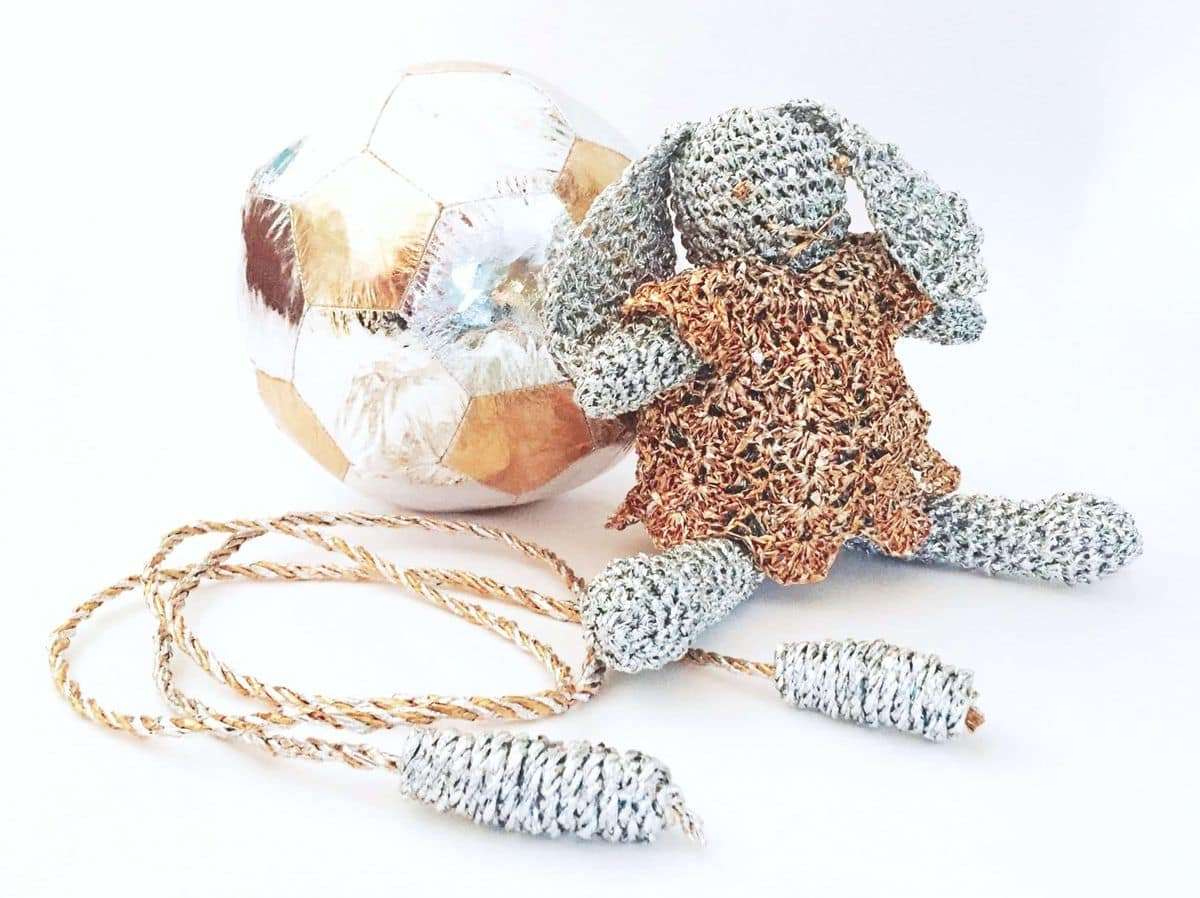 This piece is part of a project that originated from seeing footage of aid workers wrapping emergency blankets around newly-arrived refugees following a life-threatening journey across the sea.
Over half of the world's refugees are children. In this piece, toys were made from emergency blankets. The process of twisting of fragile emergency blankets into rope or yarn for crocheting imbues them with strength, echoing age-old survival techniques as well as home-making skills, and the soccer ball references balls that children in refugee camps often fashion out of whatever debris is available. However, the toys are still relatively fragile and the crocheted bunny is hard and uncomfortable, evoking the tension between the possibility of a resilient, thriving generation and the impossibility of being caught up in hostile geopolitical circumstances. 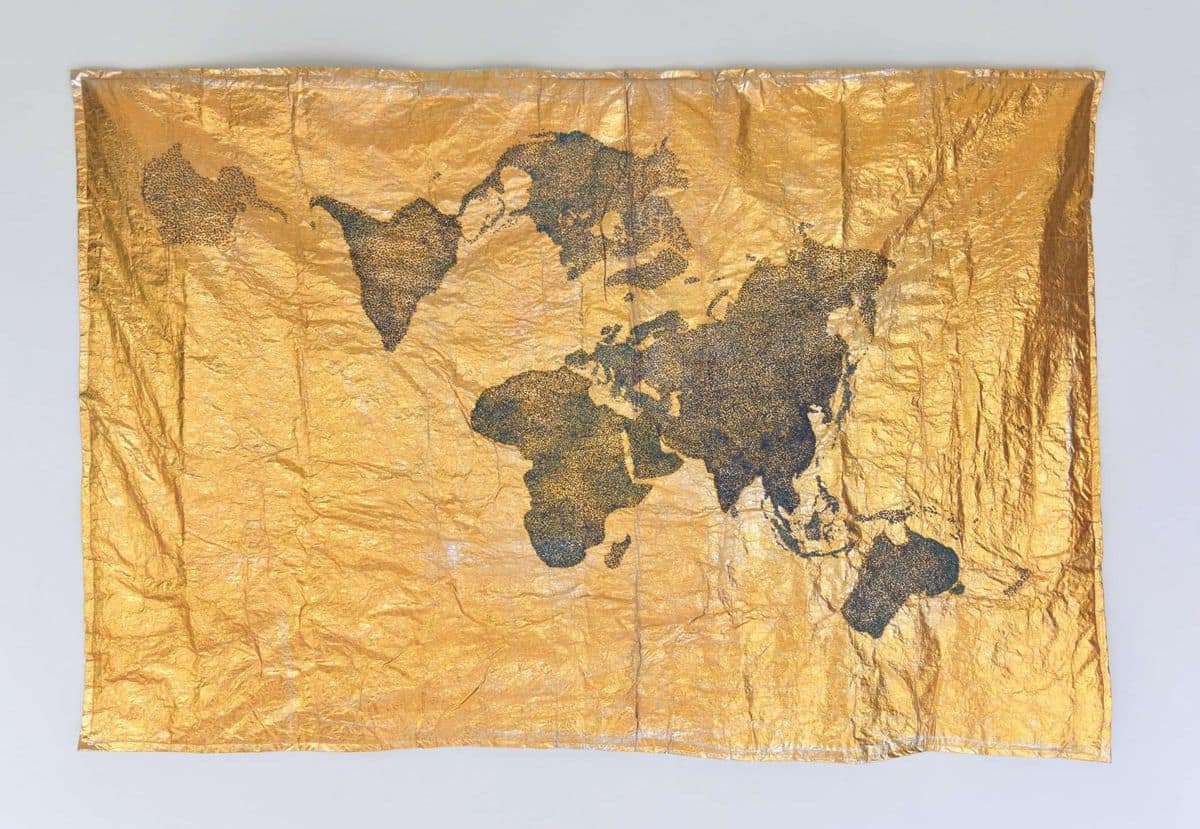 This piece transforms temporary, flimsy emergency blankets into an embroidered coverlet, and depicts the world map in individually hand-tied French knots, with areas in green indicating regions people are migrating to. Rather than using the common Mercator projection, it shows a projection that more accurately represents the relative sizes of the continents. It is also viewed from a celestial reference point at the north pole rather than privileging any particular country, appealing to a broader sense of humanity that supersedes national borders. 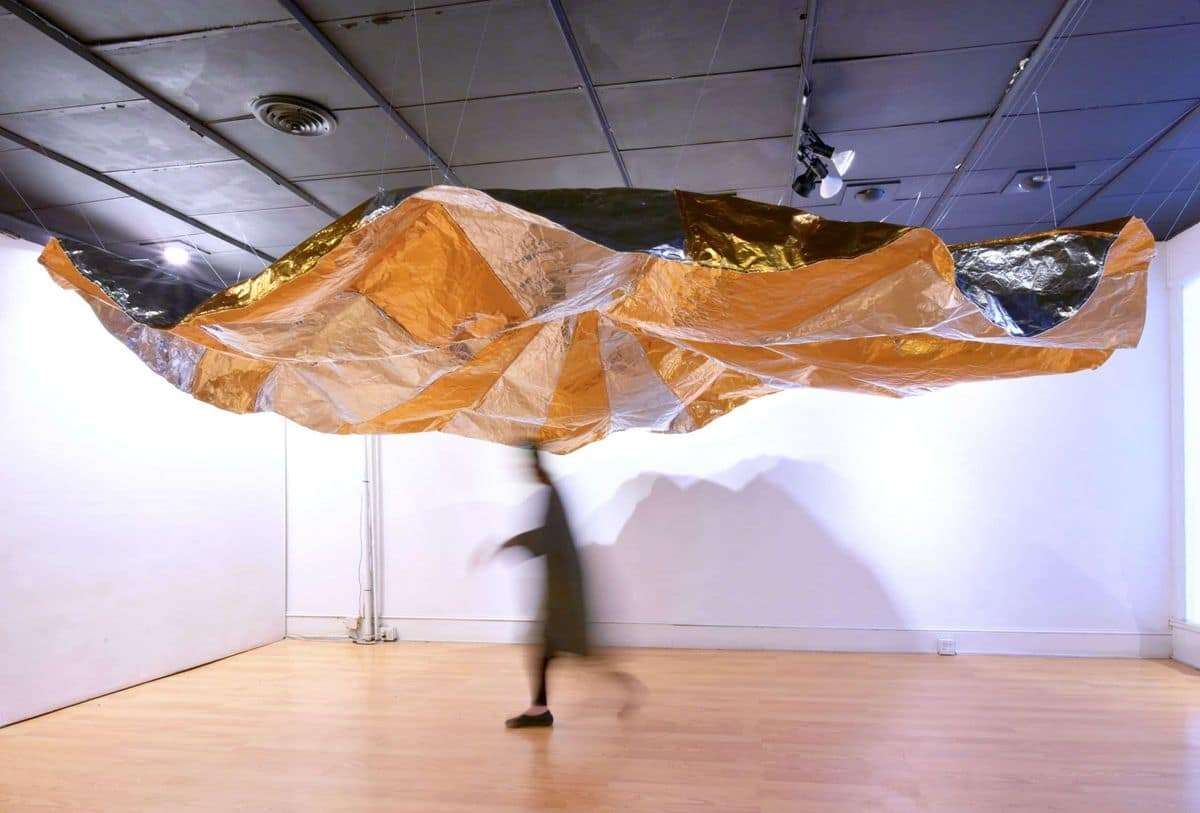 This parachute made of emergency blankets appears to be either deflating or catching the air, evoking both a safe landing device and the miniaturized world of a childhood game. In this game, children stand all along the circumference of the parachute and fling it up so that it catches the air, creating a temporary dome. This enables some to run across to the other side underneath the dome before it collapses, finding new neighbors across the way, with repeated trials resulting in waves of movement (echoing waves of migration throughout history). The frozen or suspended state prolongs the moment — a moment to breathe, a moment of possibility, a moment of safety.

I am an artist-scientist with a doctorate in molecular and cellular biology from Harvard and post-doctoral training in neurobiology from Harvard Medical School. I have been making art full-time since 2017. Drawing from my scientific training, my artistic practice generally emphasizes process and focuses on experimentation with materials and techniques, as well as research-based projects. Just as my scientific research focused on morphogenesis (how organisms or parts of an organism develop into various complex forms or shapes), my artwork uses materiality and transforming spatial forms to try to capture intermediate states of processes that are in flux, or to reflect some instability or tension that is unresolved, particularly with respect to societal transformations and social justice. I currently live and work in Boston, Massachusetts in the US.