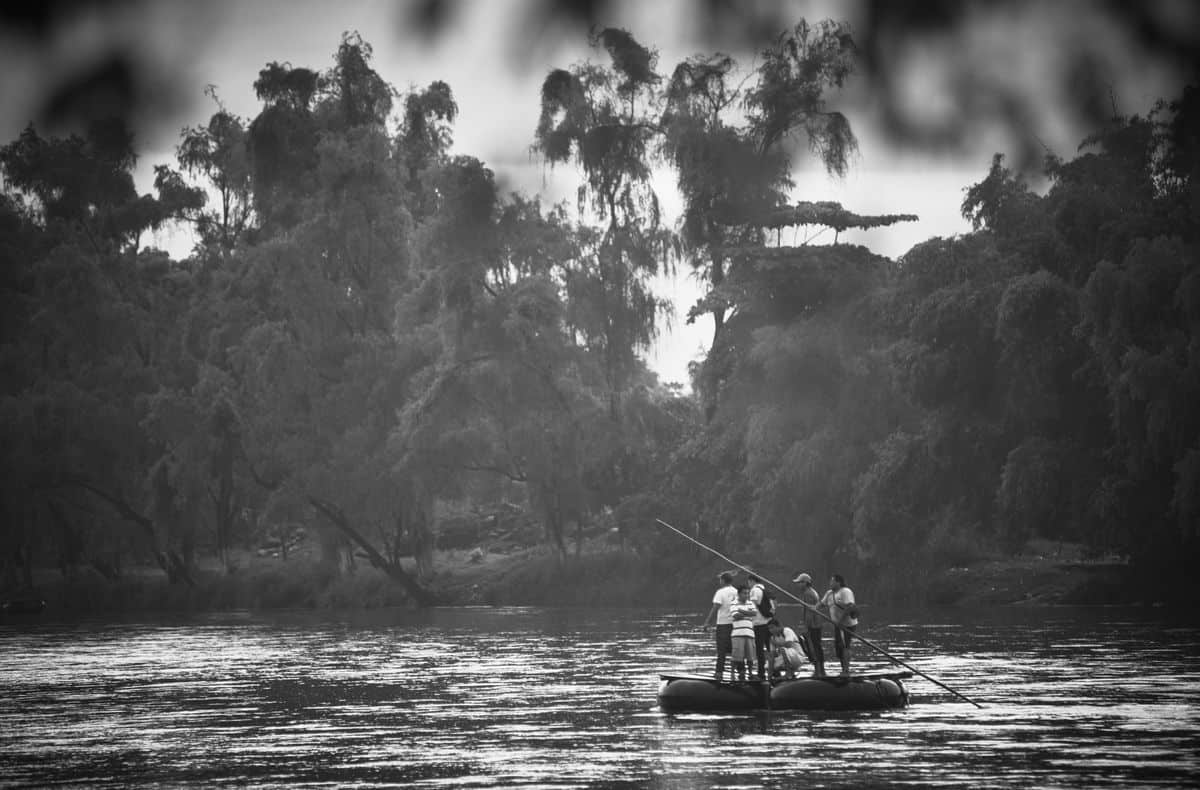 A group of refugees float on the Suchiate river border crossing. 2016

A small group of refugees travels across the Suchiate river, which sits near the border at Ciudad Hidalgo, Chiapas, Mexico and Tecun Uman, Guatemala. They travel on a raft of two giant inner tubes with planks of wood tied on.
Their crossing is close to the international bridge, which is the legal access to Mexico. 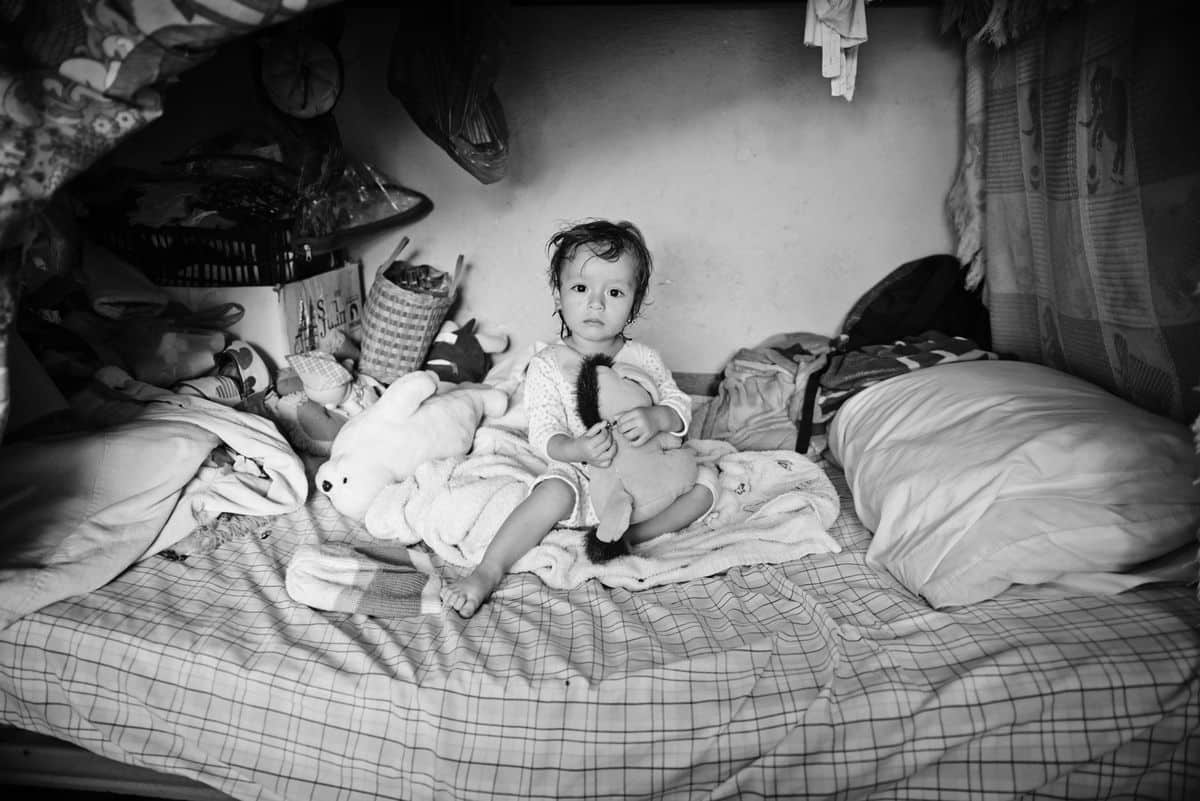 Rebecca (one-year-old) sits on the bottom bunk in the Alberge in Ixtapec. 2016

Rebecca (one-year-old) sits on the bottom bunk that she and her mother Sandra share with all their worldly belongings in the Alberge in Ixtapec. Sandra is traveling with her mother, Maribelle 39, and her one-year-old daughter, Rebeca. They lived in El Salvador. They left because the maras took her brother and so they left to live somewhere else in the same town but then the mara found them again. Her mother had a store and the mara was demanding money and then the maras killed her brother. They could no longer live with the violence in El Salvador and decided to flee. They ran from immigration twice and traveled over the course of 15 days to Ixtapec, via taxi, combi, bus and walking. Of the 15 days they walked for 8. They are heading to Monterrey but she is waiting at the Alberge for her daughter’s birth certificate as she is having difficulty with immigration because he doesn’t have one. 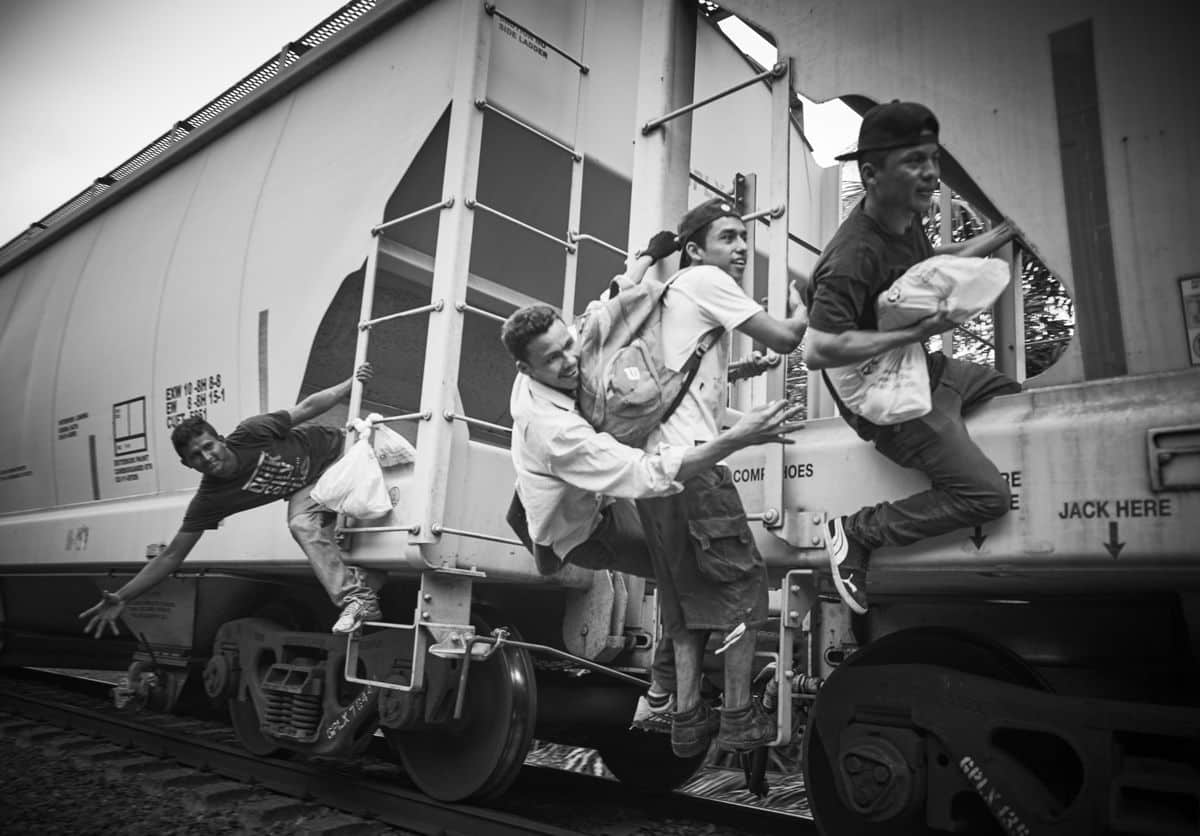 Migrants passing by on “La Bestia”, The Beast, a freight train that slogs across Mexico from its southern border to its northern one. The journey is fraught with danger, not least from falling off or being injured on the train. The train’s route is patrolled by migration police, cartels, and military – all actively trying to exploit those riding it.

Christina Simons is an award winning international documentary photographer focused on human rights and civil liberties. Her work has been exhibited throughout Australia, the United States, England, Spain, Russia and Mexico.

Part Icelandic & American, she resides in Australia as a true citizen of the world speaking multiple languages. Having worked in the visual arts industry for over twenty years she is a technical master of imagery. Her work traverses many interests including travel, lifestyle and portraiture and is represented in publications such as The New York Times and The Guardian UK as well as working with several NGOs including Medicines Sans Frontieres and UNICEF.

Her passion for human rights and civil liberties have led to series such as “The Haiti Project” on children in domestic servitude, Women’s health in the Philippines and Aboriginal Education in Australia; not to mention her multi-award winning and shortlisted series “Running to Nowhere” on Central American Refuge