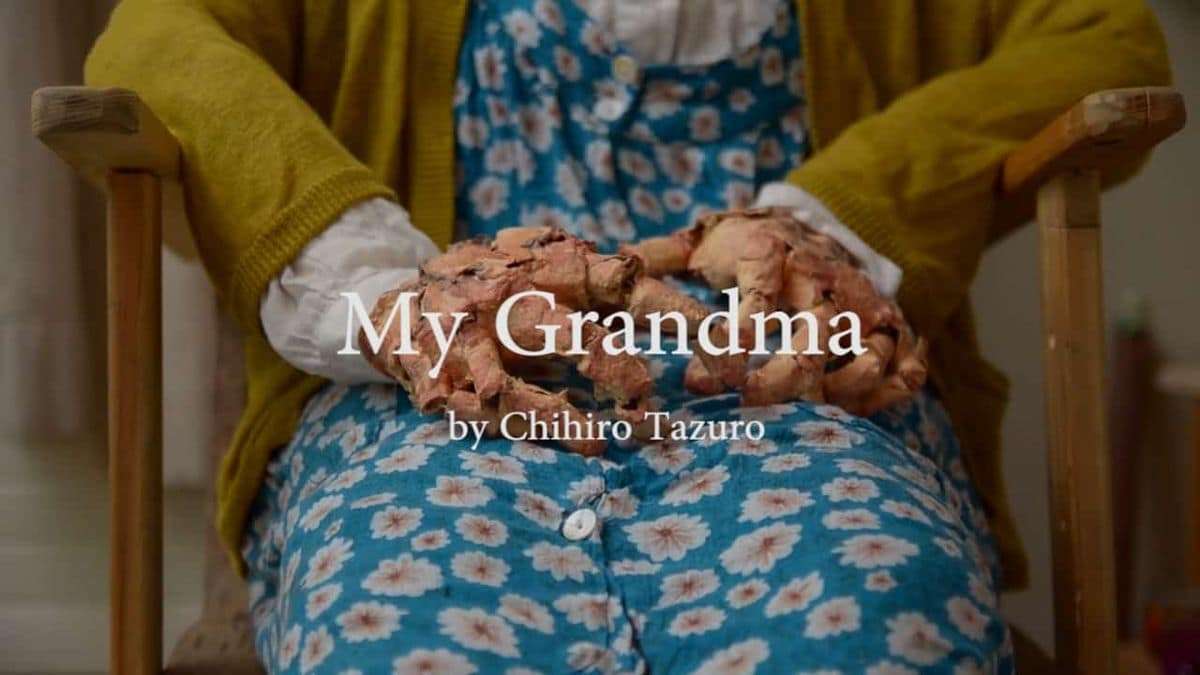 Synopsis
A grandmother is telling stories to her grandchild. She wants to tell him of the tricks and knowledge of life.
One of the stories is about the creature that shows in front of her.
The film presents the ideals and reality of the relationship between the old and young generations in a poetic way.

Director’s Statement
The short film “My Grandma” combines the techniques of live action and stop-motion animation, created after the memory of my grandmother and my future image when I get old.
I wanted to make this film because I dream to be a nice grandmother for my grandchildren.
My grandmothers were very kind to me in my childhood: we always played fun games and they shared their vast knowledge with me, teaching me many things that are useful in my life.
Through the film I wanted to give my wish and realistic emotions a visual expression.
I chose the technique of live action and stop-motion animation because it suits my childhood memories.

A biographic piece. Through my body and my voice I’m going back to my hometown in Japan, to my childhood memories. You have never been there, so I’m drawing it for you through movement and sound. I will show you the mountains, I will make you imagine the bamboo forest in the wind, the straight roads leading to my house, the rivers, the fish that is talking to me and the people who are waiting for something to come.

“Koi Fish” is a musical group combining performance, sound and live improvisation based on self-invented structures. The show includes live music (viola, drums, piano, Persian Ney, and singing) with movement, drawing and performance motifs. The essence of our project is to experience and explore sound; we’re playing with it in order to gain a deeper understanding of the meaning of sound; how it emerges from the body, how it is created, what influences it, etc. In order to do that we use improvisation as a key tool, thus resulting in a slightly different show each time we perform. The relationship between us on stage is dynamic, always changing, and affects the show itself.

Chihiro was born in Saitama, Japan. Initially she studied physical education and dance in Japan Women’s College of Physical Education (Tokyo). After graduation she moved to the Netherlands to study dance in Artez college. A year later she moved to Israel to study at the School of Visual Theater. After graduating she studied eastern music in The Center For Middle Eastern Classical Music (Jerusalem).
Today she works as a multimedia artist. Her art includes animation, dance, music, performance and more.