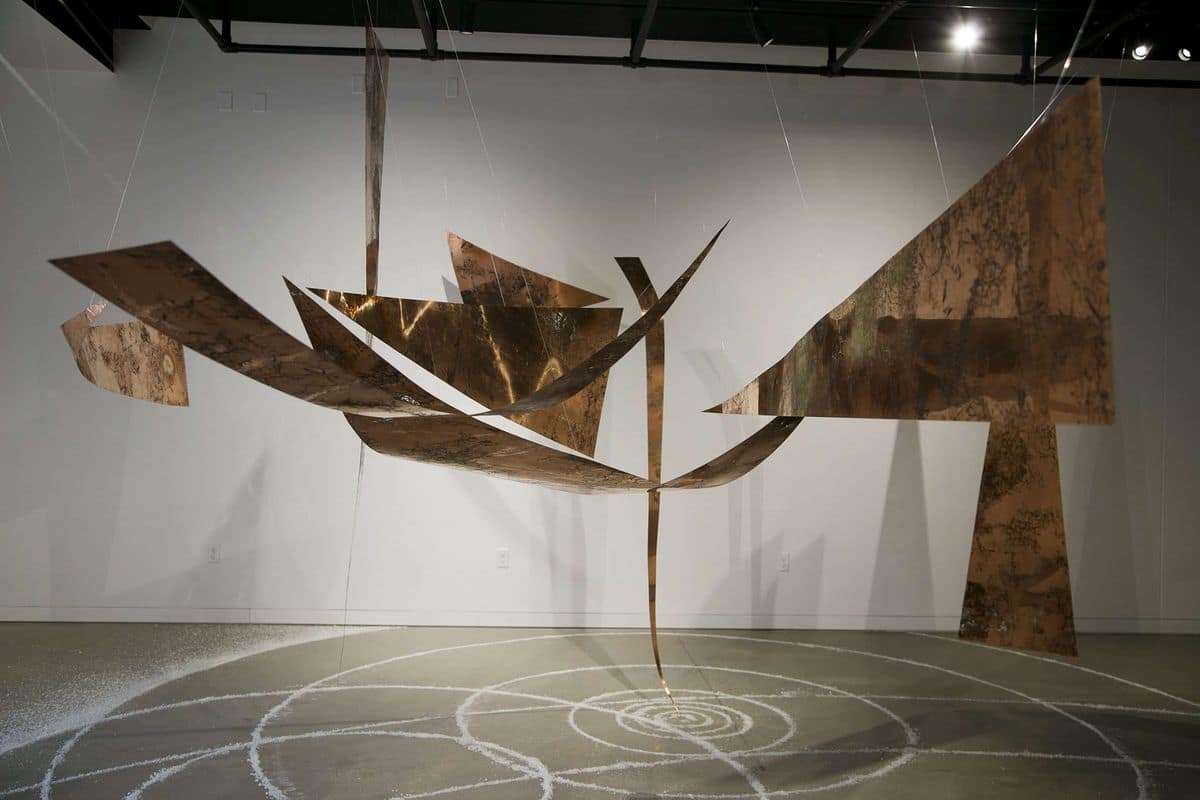 Points of Impact examines intersecting epicenters of collective tragedies and destabilized place identities, exploring degrees of impact through distance, contact, and time. A disruptive event, like a natural disaster or human conflict, can encompass an entire region, transforming the location in a direct physical sense alongside more insidious and uncertain reverberations. Onlookers straining to assess damage from shifting scales of detailed to summarized accounts often source the place and its inhabitants as evidence of the event in attempts to comprehend its magnitude. The repetitive application of etching and burning copper from both sides with satellite photos, traced material topography, and radiating circular centers serve both as representation and reenactment of a place made unrecognizable. Points of Impact presents a question of the transference between personal experience of a local traumatic event and the determination interpreted by outside observers of its significance. 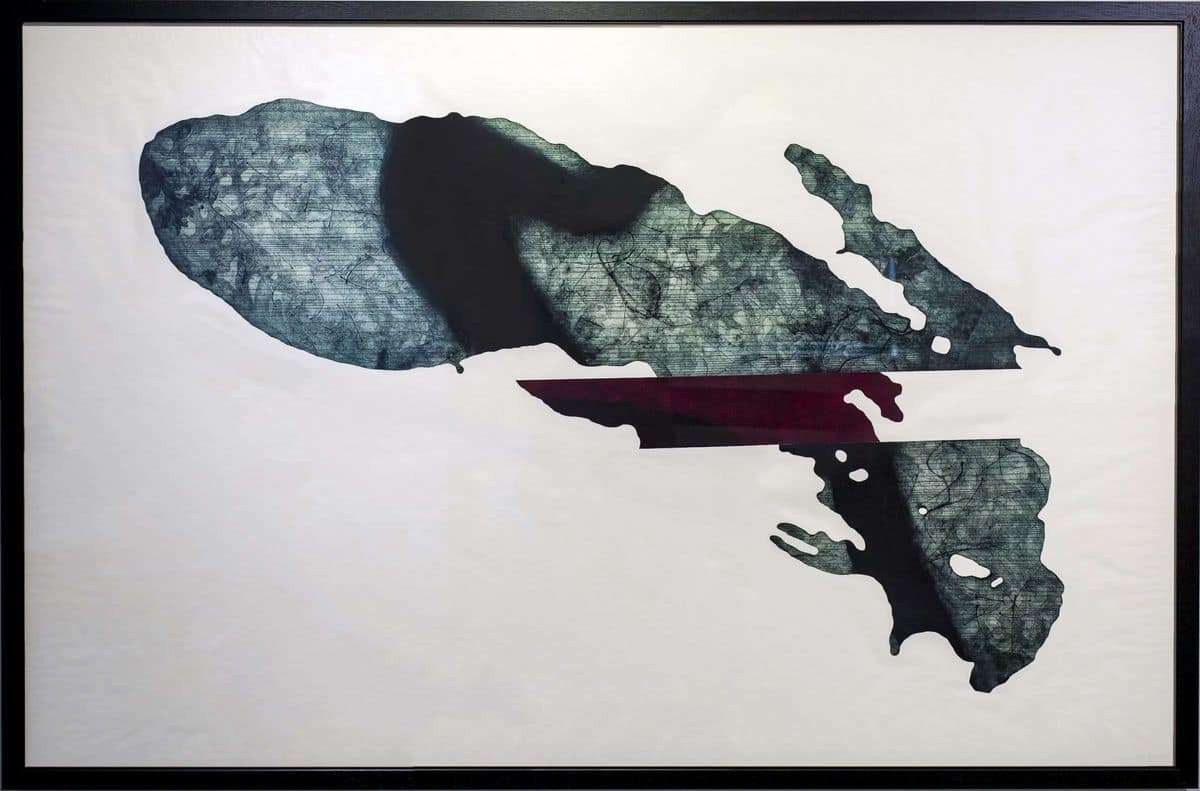 I am tracing a body by its obstruction; the body as it is held in a body of water – as the water is formed by how it is held in the land. I am thinking about the secrecy of our presence in a landscape, how we lie in it, how we share its elements, how we change it in unknown ways. “As the Crow Flies” series considers how the omittance or obstruction of something becomes the signifier for its very existence; signaling a body of evidence via its obstruction.

There are stories that are told without retelling and while they imbue themselves into our identities and into how we see the world, they remain outwardly inexplicable. This exhibit ponders how a secret is kept; how it is retold internally, preserved but mutating without validation or correction, a re-imagined memory of another’s experience. We ourselves become secret – we are unknown. In this sense, I am trying to transcribe muteness in mass. 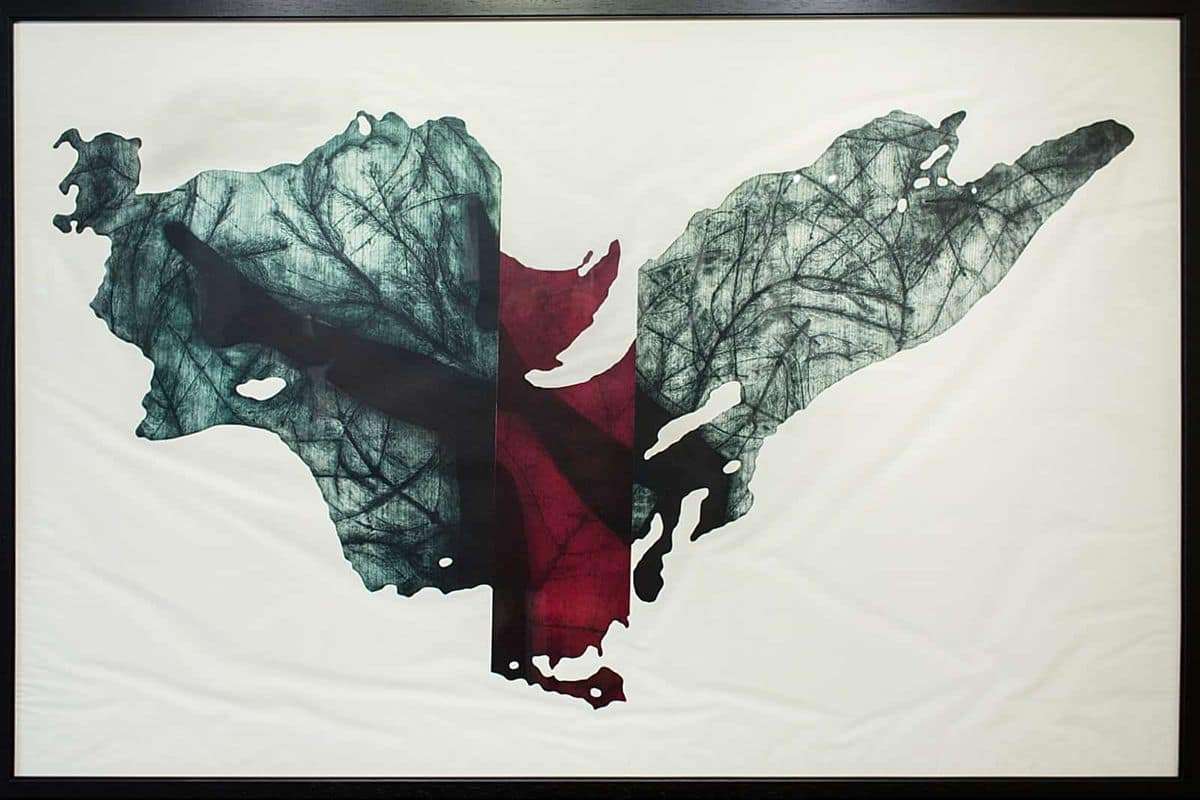 The phrase “As the Crow Flies” refers to a path one cannot follow, an inaccessible view. It’s a route that cuts through perceived gaps, untraversable spaces in the landscape. Humans wind their way around lakes, looking past these bodies of water to the land across. However, this isn’t possible with the Great Lakes. While land-locked, they expand beyond our scope, continuing an arduous conversation with one another that leads to the open sea.

This print is one in a series of five prints corresponding with the five Great Lakes in the U.S. which were exhibited collectively in the “As the Crow Flies” exhibition.

Carissa Kalia Heinrichs is a printmaker and interdisciplinary artist currently based out of Florida. She teaches as an adjunct professor for Printmaking at Pensacola State College. Her work has exhibited in Arizona, Wisconsin, New York, Florida, the Gunma Prefecture in Japan, and Berlin. Recently, her projects have focused on interpersonal secret-keeping, trauma, and the landscape operating identity in parallel. Her processes primarily specialize in experimental printmaking, alternative photographic processes, and fibers. She received her BFA in Intermedia Art from Arizona State University in 2014. Carissa was assistant project director to Gallery 224’s ‘Analog Photography: Looking Back and Looking Ahead’ program series of 2015-2016 in Wisconsin. In 2017, Carissa attended the Shiro Oni Artist Residency in Japan. She completed an MFA in 2019 at University of Wisconsin-Madison, with a Project Assistantship and thesis exhibition at Tandem Press.