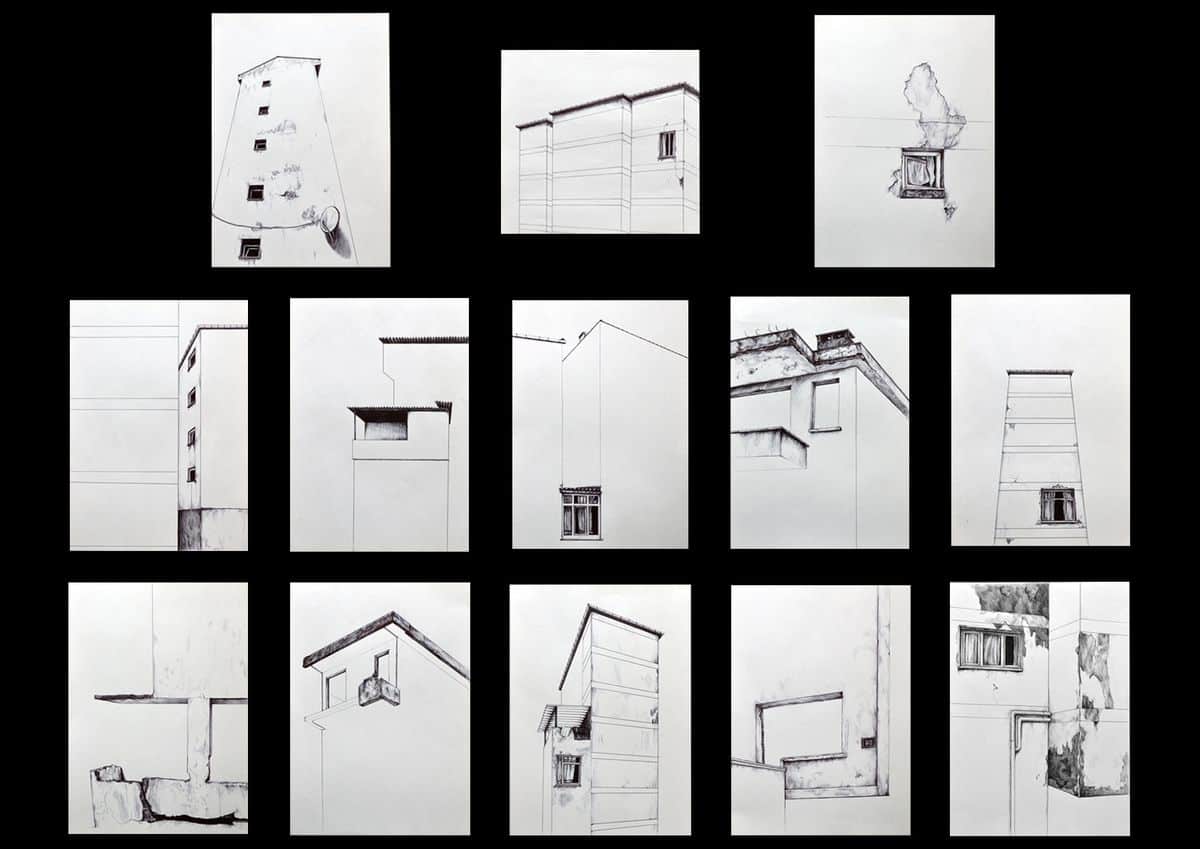 I have acquired different perspectives on the concept of "home and life", which is often the subject of my works, while going through the pandemic period.

Although we try to continue with our daily lives, as the days passed, this brought along psychological difficulties. Going beyond my classical artistic practice, approaching drawing, which is the classical understanding of art, in a kind of meditative way, transforming the photographs I took during the pandemic process with my drawings, this series emerged after about 20 days.

While the pandemic changes the whole world; the world is changing within the framework of socio-cultural, physical, economic, political and technological dynamics, and urban areas emerge as spaces where this change is reflected.

Today, the "slums" of the city, defined as "rundown areas" the people living in the districts are actually dragged to those areas and the process of forced isolation with the policy of removing them;I tried to explain with my drawing

"artifact"
1. Man-made artificial structure or appearance, artifact in microscopic, radiological and ultrasonographic examinations. 2. An unnatural product that occurs during physical or chemical events. 3. Changes on the ECG, apart from pathological changes, due to non-cardiac factors such as muscle tremors, curvature of the isoelectric line, alternating current interference, incorrect technique or application defects.

In this study where I consider the city as a living organism; As in the meaning of the word, people leave some marks on the city. These traces, which cause good or bad results, are observed in the city and on its periphery. With these effects, the boundaries become vague, change and always open to change.

Nowadays we can see our surrounding
get more and more saturated with stone and concrete
owing to the increasing amounts of real estates under the name of
"urban regeneration projects".
This uncontrolled surge spreads like a plague,
but the seriousness of the situation is not addressed.
Just like a jigsaw,
these buildings that are constantly demolished and reconstructed are
in a cycle.
In this piece that I got inspiration from these ideas,
I wanted to incorporate the observer with this phenomenon that
we witness daily,
by putting the town as a playground in front of the observer.
When observed as the "big picture",
I intended the observers to realise that it's in actuality
beyond a playground.

Graduated in 2017 from Marmara University Faculty of Fine Arts, Painting Department.
Also took part in double major program in graphics department at university for 2 years.
Artist shapes their artworks over the city, the memory of the place and life. Besides the photography and installation she also creates an archive by including in-depth research processes in many of her projects. Artist prioritizes interactivity in her artworks, thinks that the audience is a part of his works.
Beste’s works were exhibited at the platforms and institutions like; Sonar Istanbul 2020, Digiloge Mamut Art Project’17, Mixer, Mannheim' “CAPTCHA Design Festival”, “BASE’17”, İstanbul Archaeology Museum, Space Debris Art, Orjin Art, Versus Art Project. At 2019 artist held her first solo exhibition 1Kazıklıköy” at Versus Art Project. The gallery also represents the artist herself.
Beste still lives and creates her artworks in İstanbul.