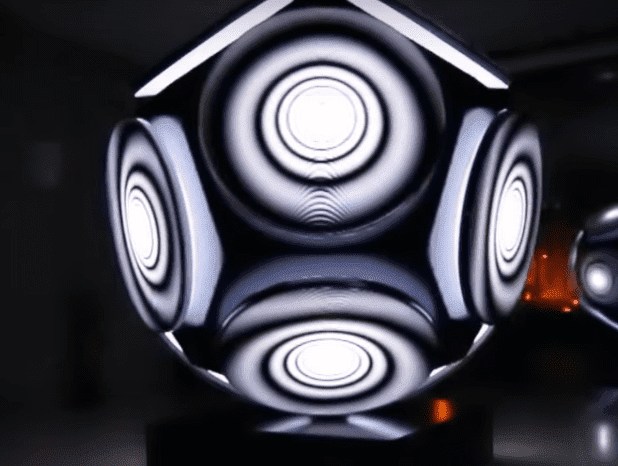 This is a kinetic light object; pulsation runs in two light-disc versions, positive / negative or plus / minus. This pentax or dodecahedron shape is not random but is made up of 12 areas in a ratio of 6:6. This is the so-called balance of counterparts, despite the very basic shape of a pentagon.

The profile of the Slovak artist Ašot Haas (born 1981) resembles a regular crystalloid polyhedron with surfaces that are determined by numerous phenomena and quantities. Multifaceted training has been involved, including in stone sculpture at secondary school, followed by industrial and transport design, and finally glass and sculpture in the studio at the Academy of Fine Arts and Design in Bratislava (2002-2007). The artist has applied a wide spectrum, including gathering of visual data and inputs from areas of science such as physics, optics, descriptive geometry, quantum mechanics, cybernetics and more. His program involves formatting his open experiential field to experiment with a generation of mathematical modules and geometric codes.

He brings a “lean” approach as well as minimalistic outputs in which he omits superfluous details and ornaments. His principal material is translucent glass and optical plexiglass sheets into which he “burns” his geometric shapes and images. In this extended Euclidian space the artist’s fundamental building blocks include elementary shapes (circles, squares and ellipses), a virtual formula and a bare body of the glass, diamond cut, refraction index and light interference.

This yields a series of pure, perfect shapes of glass discs and light reliefs with circular simulation in the space of pixels, ice explosions and circling galaxies. Haas interconnects diverse worlds and features such as hardness and brittleness (just like in the popular diamond), a watchmakers’ precision and visual art sensitiveness, rational geometric system and energy vibrations and kinetic models in an unusual way.

Finally, certain instability of the “crystalline” structures and images is involved in the game and gives rise to the moiré effect that can be perceived by the viewers; the need of quiver of stable systems that refers to ephemeralness that cannot be pinned down and pulsation within the lines of force of optic “waves”.

The contemporary exhibition of works by Ašot Haas in the White and Weiss Contemporary Art Gallery in Bratislava presents his most recent series of works called Resonance of Sound (2015-2016) for the first time in Slovakia. The collection is a cycle of plexiglass reliefs through which the artist visually “records” sound waves in space. The very beginning was the author’s project of a laser harp (A x B x C, 2013) that allowed viewers to freely interrupt the laser beam in space and create a sound track at the moment of physical contact. This resulted in a powerful interconnection of space, motion and sound.

Subsequently, Haas scanned and digitally-adjusted this interactive delineation of space with the laser harp. The scanned sound frequencies generate light images made of the aligned ribs of the cast plexiglass. The process results in concentric dynamic compositions in the shape of a circle or lengthwise mirror-arranged images along symmetric axes. The author brings compressed high-density sound and optic boards; visual seismographs of the sound landscape with a majestic curve of frequencies from the epicenter. Light and sound are dispersed depending on their wave lengths (just like on a water surface or electromagnetic fields). Ašot Haas uses these rhythmic “optical wave-ducts” to model the transmission to another dimension: not to let 3D reside in a two-dimensional surface but primarily for transmission into a diff erent optic-sonic system, into the mystery of cross-interaction of plexiglass, sound and light…
Vladimír Beskid