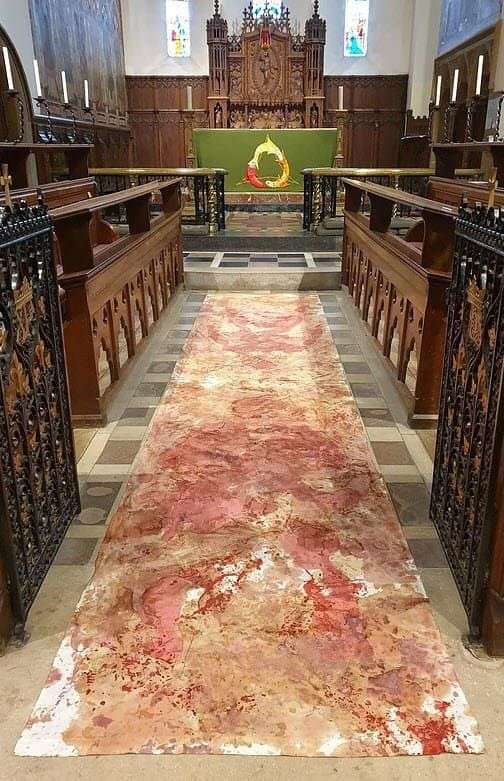 Daniel, the Voice of the People on National Radio 2019

This is the Red Shroud, from my collection The Final Teardrop, 105 x 450 cm, unframed and unfolded display, Mixed media technique on 100% cotton fabric; microfiltered coffee powder, distilled water, watercolor, acrylics and inks. In my image-archive, I have hundreds of photos that collected throughout my practice; this is research on a subject that I have been passionate about since I was a child, The Shroud of Turin; for me, acts as an analogue to the pain of people suffering amidst the harshness of social conflict, of civil war, in towns of Saudi Arabia, Iran, Iraq, Palestine, Israel, Syria, and also in Colombia, my country, places where the confrontation and internal strife have been enormously bloody; where even today they wrap their dead people in shrouds, and then bury them with the traces of blood imprinted on them. To do this I've been equally inspired by various raw visual references that remind me of scenes I have witnessed in my country, Colombia, even as a very young boy.

Mixed media on white printed cotton fabric, 200 x 90 cm, with acrylics and vinyls. From my collection Shame and the Social Constructs of Same-Sex Love. This artwork was conceived as six panels, each depicting a beheaded male figure, and each with his head placed precariously between his missing feet. I’ve added to the unique texture and multi-layered fabric patterns a fragmented rainbow flag, painting big columns of colour: red (in this one), and orange, yellow, green, blue and purple (in the other five). I’ve also used my brushes and pencils to do the work, and a black water base ink marker to get the contours of the male body silhouettes, wounds, and heads done. To research these real-life decapitated persons, I made careful reference to police reports and autopsy sketches, combining these with photographs of who befell a similar fate. This assisted me with my abstractions of bodily injury. I’ve thus seen horrendous photos which bear witness to violent aspect of human behaviour. 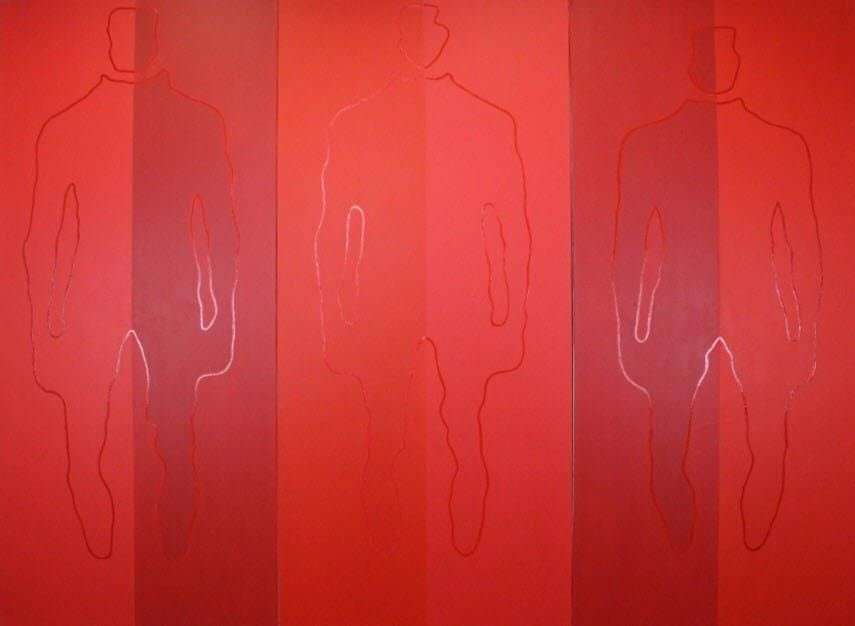 One with Nineveh and Tyre 2017

This is triptych 11, 200 x 270 x 3.5 cm, from my collection Broken Beyond Repair; mixed media on canvas technique with acrylic and vinyl paints, acrylic medium, permanent-ink markers, and matte/glossy varnishes. This artwork was inspired by popular expressions I've heard in my country: "That river of blood" and "The shower of blood", both meaning that to many people have been violently killed in the land of not human rights; and also by Rudyard Kipling’s poem ‘Recessional’ were he warns that a sense of noble sacrifice and fellowship is soon accompanied by troubling fragility, and it is the latter which stains the soil of a nation-state’s collective memory. He makes compelling reference to the fallen empires of Nineveh and Tyre, serving as admonition that humility can follow valour like night follows day. I've explored in this triptych the concept of chalk outline, which means a temporary outline drawn on the ground outlining evidence at a crime scene, as I often saw in cop movies.

I'm Angel Correa, Contemporary artist originally from Colombia, living in London for about 14 years now, married, with two cats, and working full time in my art studio located in Brixton SW9, doing there what I've been loving to do during the last 8 years, art. My current focus is an exploration centred on the human body, its frailty and the consequences of various forms of physical and mental trauma, disfigurement and disability. My present body of work entails an enquiry and interrogation of the universality of such matters, explored by means of abstraction of imagery of military servicemen, members of minority groups (LGBTQ+), people of colour, everyman heroes and epic religious martyrs who have been killed, disfigured and/or subjected to reconstruction and impairment from social conflict, war injuries, wounds and psychological traumas. My intention doing my artwork is to dedicate myself to the representation of real or imagined events, news, dreams and myths, or classical themes.