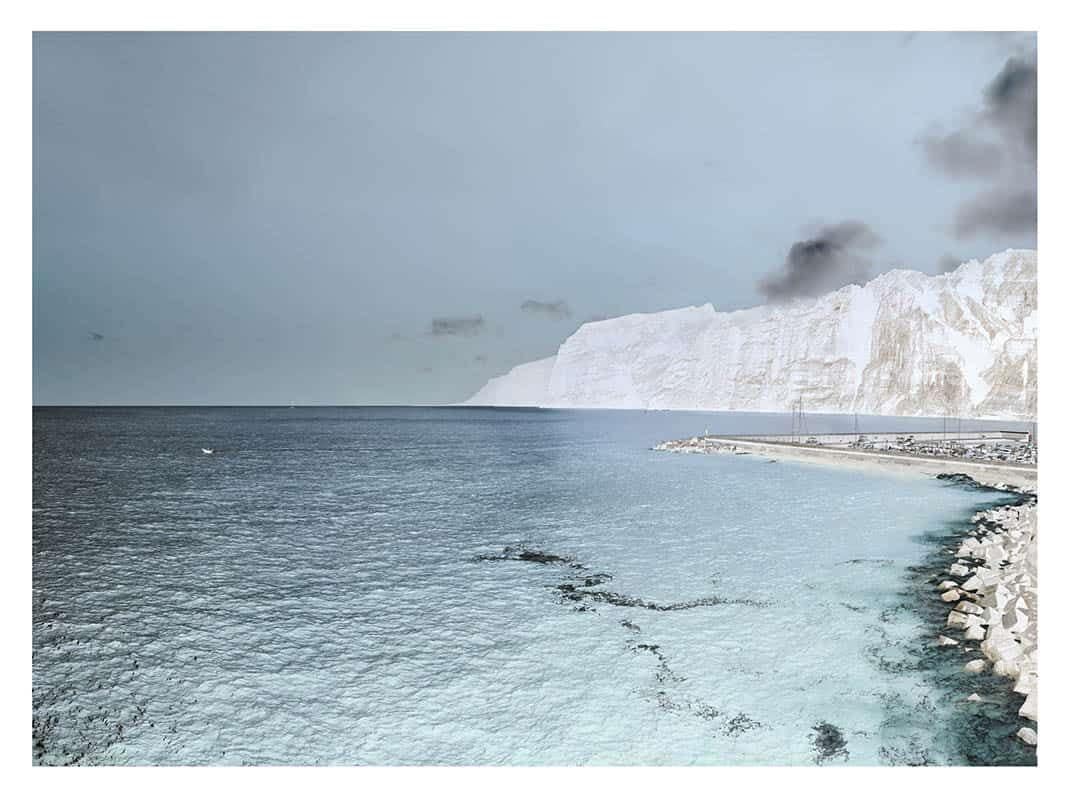 Utopias are sites with no real place. They are sites that have a general relation of direct or inverted analogy with the real space of Society. They present society itself in a perfected form, or else society turned upside down, but in any case these utopias are fundamentally unreal spaces.
Michel Foucault, Of Other Spaces (1967)

Personal Topographies is a body of work that uses multiple photographic images of a place, digital technology and artistic interpretation to transform ordinary spaces into large scale utopias. The final artworks insinuate an imaginary landscape, spaces that invite the viewer to reflect on their own dreams and narratives. From the Impossible Utopia series. A poetical project with a inquisitive nature. The series explores the geographical border between England and mainland Europe. Each artwork is constructed from dozens of long exposures photographs captured under the moonlight. The project reflects on our new world and raises questions about borders, migration, travel and identity. The surreal images play with the passage of time, it explores a form of representation that flirts between photography and painting. It depicts beautiful seascapes reach in painterly details and with many untold stories. My aim to offer the viewers a calming canvas for reflection and entice debate on important current contemporary issues. From the Within Series. The project explores the creation of very large scale cityscapes constructed from hundreds of of photographs, Most big cities are going through major redevelopments, heritage buildings getting reshaped or replaced with modern architecture. In this project, I felt the need to develop large scale representations that illustrate and document this urban transition. Each city is photographed in detail from tall roof tops in hundreds of architectural details that are later used to reconstruct the final scene. This project is also a revisit to my childhood memories: “As a young boy, I used to spend lots of time drawing buildings, motorway junctions & cityscapes viewed from above with a very realistic sense of perspective…. I also remember the re-occurrence of electricity power failures: street generators that would temporarily fail, creating a sort of twilight or mini blackout in the neighborhood… “

André Lichtenberg was born in Porto Alegre, Brazil in 1964 and is currently based in the UK. André's practice is informed by an intuitive and experimental approach to image making. His large scale constructed artworks explore the complex relationship between humans and the environment while simultaneously reflecting back into his own childhood memories. His work has been exhibited in museums and private galleries worldwide, including the Barbican Centre London in 1998, Centre Pompidou/IRCAM, Paris in 2015/16 and Fabrica, Brighton in 2018. His artworks are represented in numerous international art collections including a recent acquisition by the prestigious Joseph Cohen Family Collection in NY.