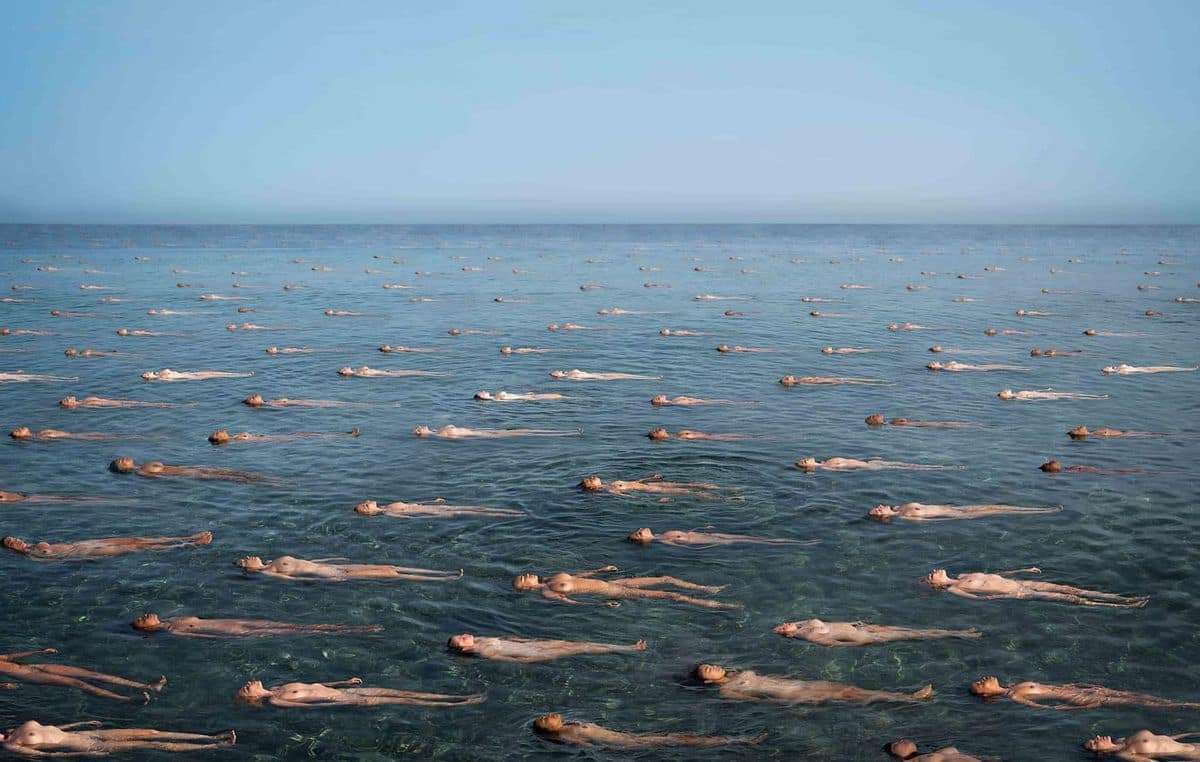 Mar de fondo is a work inspired by the number of women who die every year, the corpses hidden in seas and oceans and, above all, by nature’s own revelation when it lets out the injustice it carries inside.
This piece is conceived to be installed facing the sea so as to establish a dual relationship, almost perfect, and trying to create a mirror effect where the image becomes a reflection and a projection of reality. A game is established with the idea of an empty, calm sea, by placing in front of it an image that reveals all the conflict hidden under that apparent passivity.
It is a way to visualize the catastrophic consequences of human migrations. Nudity and the multitude of corpses are used to express issues such as violence against women and the discriminating looks that still prevail in the social imaginaries throughout the world.

With a work deeply rooted in photography, and now also in video art, the artist has devoted herself to inquire into that area of re-founding where she places herself as an object while proposing stories of other women suffering from very personal traumas. In that sense, all her creation is supported by research closely associated with the people who are eventually captured by her camera lens.
While her work focuses on women, she builds certain feminist spaces which, before following the most prevailing trends in gender theories, reveal a deviation, a personal way of assuming female identity, the cultural values and assumptions from which it is conceived.
Thus, all her work focuses not only on a narrative which not only has aesthetic pertinence but cultural and social as well, were the consciousness of an era where women have conquered their autonomy despite the many stigmas that still hunt them as part of a historical conflict is permanently questioned.

Photography and now video-art are my media of choice. My work starts with a lengthy research process working very closely with the people I seek to capture with my camera lens. I use my own image and body as the object while re-telling the stories of women from specific traumas in their personal histories. Most importantly, my own personal anxiety is inspiration during my creative process along with the many sensations it provokes in me. The thought processes I experience during my anxiety attacks are a big source of inspiration and the underlying trauma which goes back to childhood experiences are also present during my creation. Also, the macho society I live in and encounter every time I leave my house and walk down the streets of Havana, the behavior of men towards women in a social environment and women’s response, play a key role in how I translate it later into my own art.

Frida Kahlo, Ana Mendieta and Iris Van Herper, are my creative inspiration; all three have made clear refe