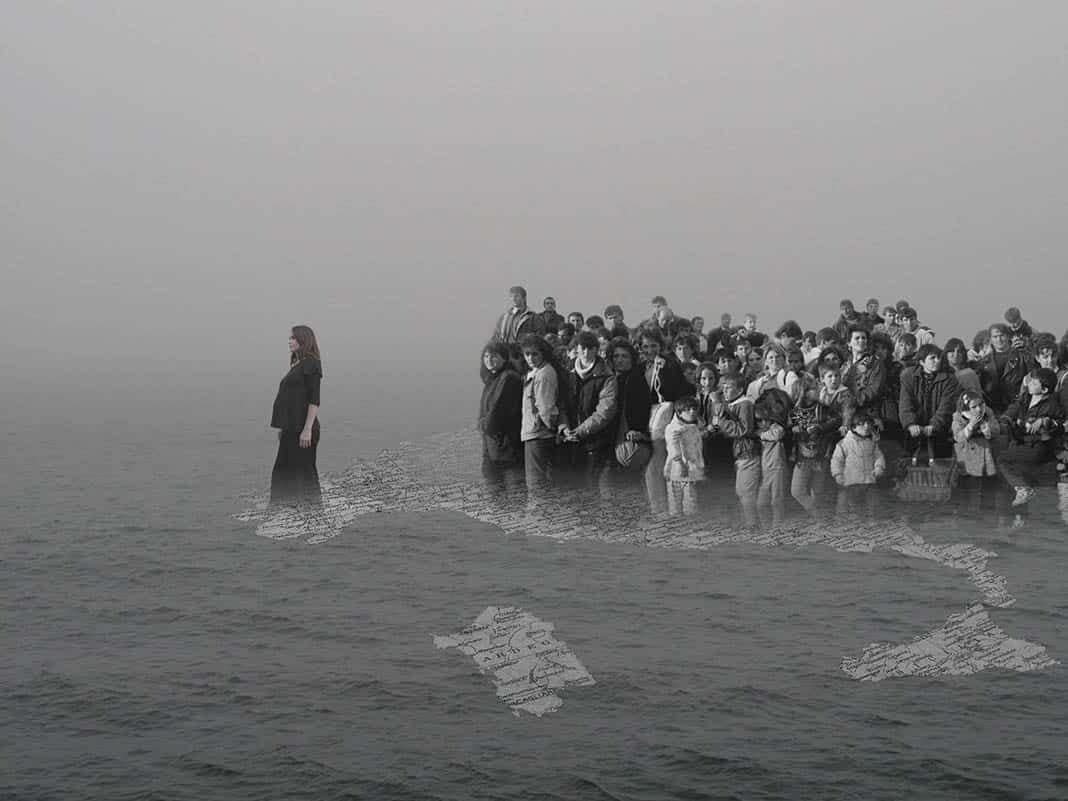 An indefinite crowd of refugees drifts forward uncertainly, on a precarious bridge projected into the void and materialised by an image: a map of Italy, floating on the sea. In front of them an artist: she is pregnant, her look is resolute and has a visionary gaze, and she is heading straight in front, into the future. Dalla Clandestinità (Living Clandestine) is the title of the series which this particular work belongs to; it was created by Agnese Purgatorio a few years ago and since then it has been rethought several times, each time modifying it slightly, and thus changing consequently the issue at stake. This work is, indeed, a digital collage, a technique that allows hybridizations and that the artist has been systematically practicing for many years, obtaining thus her most significant series. These works are often coupled with a video installation: Fronte dell’Est, Dalla Clandestinità, Perhaps you can write to me…

This Side of Paradise is a video performance set up in two different spots: an abandoned military base in Bari and an almost empty attic in Strasburg. It’s meant as a reflection about the difficult development of relationships in a world full of egotism and on diversity from different perspectives and points of view. By means of this video performance the artist looks into places of solitude where people moving from one country to another try to find a shelter. Two women enter a room in an abandoned military base and by an unconventional usage of space what used to be public is changed in something new, intimate even if provisionally. The uniforms take on a new meaning: not war, but transformation.. Rituals and practices of contemporary art are a matching pair with emptiness. Art is a claim to a different world.
This Side of Paradise è realizzata in due luoghi diversi, una caserma abbandonata a Bari e un sottotetto a Strasburgo: sono i luoghi della solitudine dei migranti di ieri e di oggi, ma il sogno è sempre lo stesso una nuova cittadinanza che nel video è espressa dalla danza propiziatoria con la bandiera. Le divise assumono così nuovo significato: non guerra ma, trasformazione.

This side of Paradise 2017, is a metaforical crossing of the forest, but also the welcome front, a place of arrival and waiting, meaning both pause and expectation and leads to a tragic thought: how much of a disappointing paradise Europe is for migrants.? Seeing through something, represents the complexity and the urgency of communicating with the Other. This work focusing on the complexity of geographic and human relations and exploring the concepts of clandestine with small, poetic acts that take place around the idea of border, every kind of border.

Agnese Purgatorio is an Italian artist who works primarily in photography, video installations and performances. She draws her inspiration from a melting pot of cultures and with her artistic work she invents her own space, a poetic space, a mix of reality and imagination. An hybrid floating reality that invites the viewer to interrogate personal narratives and collective memory. She has exhibited her works both in Italy and abroad, in solo and group exhibitions [Galleria Bonomo – Bari, Gallery Onetwentyeight – New York, Mars Gallery – Melbourne, Podbielski Contemporay – Berlin, Venice and Moscow Biennale, Triennale di Milano, Armenian Center for Contemporary Experimental Art – Yerevan, the Museum of Contemporary Art – Zagreb, el Museo de Arte Contemporáneo – La Plata , and many others